What is Tableau? | Tableau Product Suitec

Data analysis is very quick with Tableau & the visualizations created are in the form of dashboards & worksheets. The data that is created using Tableau can be understood by professional at any level in an organization. It even allows a non-technical user to create a customized dashboard.

The best features in Tableau are :

The great thing about Tableau software is that it doesn't require any technical or any kind of programming skills to operate. The tool has garnered interest among the people from all sectors such as business, researchers, different industries, etc.

The Tableau Product Suite consists of 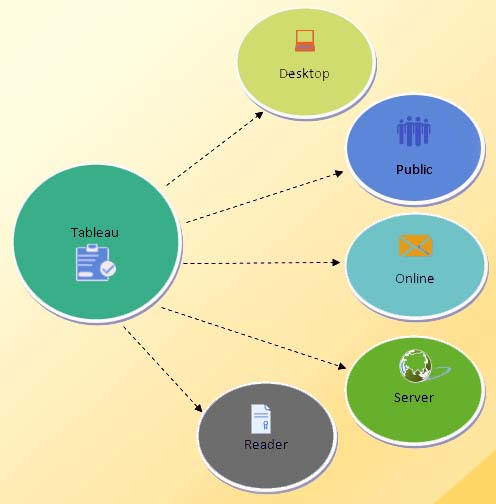 2.    Sharing Tools: As the name suggests, the purpose of the tool is sharing the visualizations, reports, dashboards that were created using the developer tools. Products that fall into this category are Tableau Online, Server, and Reader.

Let's study all the products one by one.

Tableau Desktop has a rich feature set and allows you to code and customize reports. Right from creating the charts, reports, to blending them all together to form a dashboard, all the necessary work is created in Tableau Desktop.

For live data analysis, Tableau Desktop provides connectivity to0020DWH, as well as other different types of files. The workbooks and the dashboards created here can be either shared locally or publicly.

Based on connectivity to data sources & publishing option, Tableau Desktop is classified into

The development features are similar to Tableau Desktop. Personal version keeps the workbook private, and the access is limited. The workbooks cannot be published online. Therefore, it should be distributed in Tableau Public or Offline.

It is Tableau version mainly builds for the cost-effective users. By the word "Public," it means that the workbooks created cannot be saved locally, in turn, it should be saved to the Tableau's public cloud which can be viewed and accessed by anyone.

There is no privacy to the files saved to the cloud since anyone can download and access the same. This version is the best for the individuals who want to learn Tableau and for the ones who want to share their data with the general public.

The software is used to share the workbooks, visualizations that are created in Tableau Desktop application across the organization. To share dashboards in the Tableau Server, you must first publish your work in the Tableau Desktop. Once the work has been uploaded to the server, it will be accessible only to the licensed users.

However, It's not necessary that the licensed users need to have the Tableau Server installed on their machine. They just require the login credentials with which they can check reports via a web browser. The security is high in Tableau server, and it is much suited for quick and effective sharing of data in an organization.

The name itself says, it is an online sharing tool of Tableau. Its functionalities are similar to Tableau Server, but the data is stored on servers hosted in the cloud which are maintained by the Tableau group.

There is no storage limit on the data that can be published in the Tableau Online. Tableau Online creates a direct link to over 40 data sources that are hosted in the cloud such as the MySQL, Hive, Amazon Aurora, Spark SQL and many more.

It a free tool which allows you to view workbooks & visualizations generated using Tableau Desktop or Tableau Public. The data can be filtered but editing and modifications are restricted. in Tableau Reader security level is ZERO, as anyone who gets the workbook can view it using Tableau Reader.

If you want to share the dashboards that you have created, the receiver should have Tableau Reader to view the document.