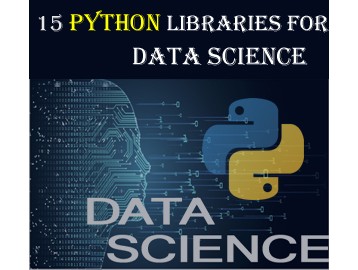 About this Course. The Introduction to Data Science class will survey the foundational topics in data science.  It Manipulation. Data Analysis with Statistics and Machine Learning. Data Communication with Information Visualization.

Python is a high-level programming language designed to be easy to read and simple to install. It is open source, which means it is free to use, even for commercial applications. Python can run on Mac, Windows, and Unix systems and has also ported to Java and .NET virtual machines.

These are the basic libraries that transform Python from general purpose programming language  into powerful. Robust tool for data analysis and visualization. Sometimes called the SciPy Stack.

2. Theano uses NumPy-like syntax to optimize and test mathematical expressions. What sets Theano apart is that it takes advantage of computer GPU to make data intensive calculations to 100 xs faster than the CPU alone.

3. TensorFlow is another high-profile entrant into machine learning, developed by Google as an open- source successor to DistBelief, their previous framework for training neural networks.

Imagine scenario in which your business does not have the advantage of getting to gigantic datasets.

1.Scrapy is an named library for creating spider bots to crawl the web and extract structured data like prices, contact info, and URLs.

2. NLTK is set of libraries designed for Natural Language Processing. NLTK basic functions allow you to tag text, identify named entities, and display parse trees. which are like sentence diagrams that reveal parts of speech and dependencies.

3. Pattern combines the functionality of Scrappy and NLTK in a massive library designed to serve as out of box solution for web mining, NLP, machine learning, and network analysis.

LIBRARIES FOR PLOTTING AND VISUALIZATIONS

The best and most sophisticated analysis is meaningless if you cannot communicate it to other people.