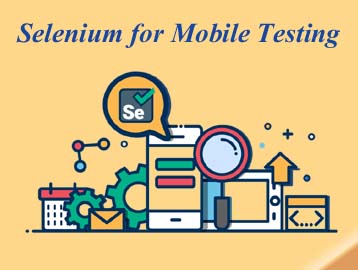 Selenium Be Used for Mobile Testing

The test automation engineer has definitely heard of Selenium. the times changing and all asking can use Selenium skills with mobile testing as well. we have some great news for keep on reading.

Selendroid, as the name suggests is a Selenium-based test automation framework. It made especially for Android drives off the UI of native and hybrid apps. Selendroid also used on emulators and real devices. It integrated into the Selenium Grid for scaling and parallel testing.

Appium cross-platform cross-technology mobile UI testing framework. It based on Selenium for native, hybrid and mobile web apps. This means run tests on both Android and iOS while writing one test script. Every test automation engineer to write tests with Selenium write tests with Appium. The best thing about Selenium/Selendroid and Appium. the test scripts in any WebDriver-compatible language. such as Java, Objective-C, JavaScript with Node.js, PHP, Python, Ruby, C#, Clojure, or Perl