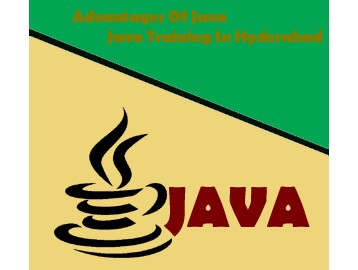 Java has gained popularity since its origin. Due to its programming features, it has increased rapidly and accepted widely. The main reason for its growth is 'write once and run anywhere'. Java chosen as the programming language for computer networks. It is popular because of its features. Java is simple, object-oriented, portable, platform independent, secured, robust, architecture neutral, multi threaded and distributed. . Java has advantage over other programming languages. Its environment makes it suitable for executing any programming task.

Java is easy to learn

When compared to C and C++. Java is easy to use. It means it is easy to write, compile, debug and learn than other programming languages.

Object-oriented programming is a method that simplify software development. This allows to create modular programs and reusable code.

Java is platform independent, it means it can  run on any operating system. The advantage of Java is its ability to move from one computer system to another. It is the ability to run the same program on different systems. Java succeeded at this being platform-independent at source and binary levels.

Multi-threading is the process of executing multiple threads simultaneously within a program. In Java, multithreading integrated into it. While in other languages, system-specific procedures are called to enable multithreading.